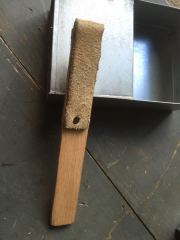 During the nineteenth century, a soldier who fastidiously tended to his uniform was often teased for being a “buff stick,” a nickname derived from a small piece of wood covered with leather that most soldiers used to polish their brass uniform buttons. But only once has the name been given to an entire regiment – the Third U.S. Infantry – and for well over a century they have worn that distinction with pride. Even during times of war, the regiment sought to maintain its polished and soldierly appearance.

In the European armies of the nineteenth century, a new recruit was issued what was known as his “kit of necessaries.” The British Army, for example, provided toiletry items and mess gear as well as materials needed to maintain his “spit and polish” appearance such as blacking, shoe brushes, and a button brush.

But not in the U.S. Army, where each enlisted man was required to provide his own “soldier’s necessaries.” Private Charles H. Moulton, 34th Massachusetts Volunteer Infantry, complained that this practice quickly depleted a soldier’s salary. “I tell you for a fact, this soldiering business takes up about all a fellow’s petty $13 a month,” he wrote home in 1862. “We have to dress up in such style, and such extravagancies require about all his wages. White cotton gloves, subscriptions to Regimental funds for tailoring, shoemaker, band, etc., emery paper and crocus cloth by the yard to polish guns, and any quantity of other trifling expenditures” all quickly added up.

The buff stick was an important part of a soldier’s kit. These generally consisted of a short flat piece of wood to which leather had been glued on both sides except on the handle. Borrowing this tool from earlier craftsmen such as jewelers, watchmakers and gunsmiths, soldiers used it to remove tarnish from their brass.

For more effectiveness, the buff stick was “charged” with a small dab of an abrasive compound. During these years before chemical polishes were invented, soldiers used a range of different soft abrasives to buff out scratches and imperfections, all naturally occurring mixtures of minerals or rock dust. Emery dust, which contains corundum and magnetite, was originally shipped in from Turkey and Greece. Crocus was a powdered variety of iron oxide. An abrasive known as rottenstone (or a similar powder called tripoli) was produced from finely sifted limestone dust mixed with silica. Chalk was considered the softest of these abrasives. By the Civil War, many of these were being glued to either cloth or paper and were available commercially, the beginning of the end for buff sticks.

Starting with harder powders such as emery and crocus, a soldier moved progressively down to finer and softer materials such as rottenstone and chalk. For the hardened steel barrel of a musket, the 1862 Ordnance Department recommended using fine emery flour moistened with oil while soldiers’ letters also mention using crocus powder. Both of these abrasives however were too harsh for brass. Instead, the manual suggested using rottenstone moistened in vinegar or water (but never with oil or grease). Chalk was also used to polish brass. 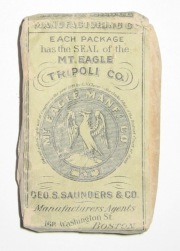 To purchase these materials, soldiers turned to their ever-present regimental sutler, the civilian merchant who was authorized to sell goods in the camp. Army regulations specified that a council of officers was to periodically review the sutler’s inventory and prices to ensure the store carried the needed “soldiers’ necessaries” such as blacking and polishing powders in addition to groceries, clothing and other articles of use to soldiers. One 1861 sutler inventory lists emery and rottenstone powders for ten cents per ounce, crocus at five cents per ounce, and chalk at three cents per ounce, probably sold in small paper envelopes. Soldiers also wrote home to request these needed items. “I have stockings enough,” Lieut. Charles Brewster of the Tenth Massachusetts told his mother in 1861, “but I should like a doz. papers of Mount Eagle Tripoli…”

Private William Ray of the 7th Wisconsin Volunteer Infantry recorded in his diary that he kept his brushes and polishes in his knapsack, probably a typical practice for most soldiers. “This Tripoli is for cleaning our brasses, used with the button brush,” he wrote. “And then there is emery paper & crocus cloth & oil &c for cleaning the guns.”

The Third U.S. Infantry continues this proud tradition of maintaining its polished and soldierly appearance, with brass shining and leather blackened. So it is with pride when the shouted command can be heard on the battlefield: “Buff Sticks, forward!”