This was a presentation our Sgt. Geoff White did for the Rappahannock Valley Civil War Round Table. He plays the following songs: 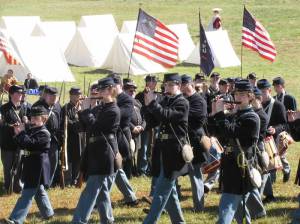 During the American Civil War, music played a prominent role on both sides of the conflict: Union and Confederate.

On the battlefield, different instruments including bugles, drums, and fifes were played to issue marching orders or sometimes simply to boost the morale of one's fellow soldiers.

For the infantry, fife and drums were used to announce daily activities, from sunrise to sunset. Reveille was sounded to begin the day at 5 AM, followed by an assembly for morning roll call and breakfast call. Sick call was sounded soon after breakfast, followed by assemblies for guard duty, drill, or to begin the march. Drummers were also important on the march to keep soldiers in step during parades and to call them to attention. In battle, drums were sometimes used to signal maneuvers and give signals for the ranks to load and fire their weapons. When not playing for their respective regiments, musicians were often combined with regimental or brigade bands to play marching tunes or provide field music for parades, inspections, and reviews.

Singing was also employed as a recreational activity, but as a release from the inevitable tensions that come with fighting in a war. In camp, music was a diversion, helping the soldiers deal with homesickness and boredom. Soldiers of both sides often engaged in recreation with musical instruments, and when the opposing armies were near each other, sometimes the bands from both sides of the conflict played against each other on the night before a battle.