Shoulder Scales in the Field 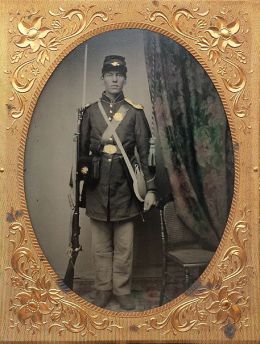 Did the Civil War Regulars Wear Shoulder Scales in the Field?

Because we lack any clear, direct documentation indicating whether the US Regulars in the war’s eastern theater wore their shoulder scales while in the field—particularly during the First Battle of Bull Run—I offer below an argument that available information suggests that they would probably not have worn shoulder scales. The eastern Regulars’ adoption in February 1862 of what would become the standard enlisted uniform for the Union Army in the Army of the Potomac (four button sack coat, sky blue pants, and forage cap) complicates our efforts to understand the exact configuration of the Regular’s uniform in the early days of the war, because it greatly limited opportunities for soldiers and regiments to have their photo taken while in the field.

Looking both at the limited evidence from the eastern Regulars and the more substantial record from the west, my argument that Regulars—east and west— probably did not wear scales in their field rests on five points:

1. There was a clear distinction between a Regular’s dress uniform and what was worn in the field, the chief difference for enlisted men was probably the use of scales and gloves. Documentary reports show this distinction between dress and field uniform existed in the early days of the Civil War and so almost certainly would have applied at First Bull Run. For example, as the battalion of the Third Infantry marched from Fort Clark toward San Antonio in 1861, a message from the Department commander arrived urging that they bypass the city to avoid upsetting its pro-Confederate citizens. The battalion’s commander, Major Shepherd, opposed this, though, leading Company D’s Lieutenant William H. Bell to record that "...the old regiment was not in the habit of sneaking around through by-ways when the main road was open. Major Shepherd called a council of the officers and it was determined the full-dress uniform should be gotten out and put on…” If the Regulars were already wearing their standard uniform of frock coat, dark blue pants, and Hardee hat, what marks would be left to distinguish a different enlisted dress uniform, but putting on scales and wearing white gloves? Moreover, the fact that the 3rd had to take action to put on the dress uniform indicates they there were not wearing these scales on the march, that is, in the field. 1

2. Probably reflecting the above point, written and graphic reporting suggests the western Regulars didn’t wear shoulder scales in the field. The comments of Lieutenant Mills—commanding Company A, Third Battalion, 18th US—noted in That Body of Brave Men (and in Mill’s own book, My Story) suggest that scales were only 2/19/2011 worn for dress parades and other “formal” occasions. In Mills’ book, he recounts the experience of dumping a heavy box bearing his company’s shoulder scales into a latrine when they needed to find room in the regimental wagon for other gear. Mills later wrote “While many intelligent men knew [the scales’] uselessness, no one had the courage to advocate their abandonment.” That Mills’ company was the next day put on report for not wearing their scales for Sunday dress parade is remarkable, but the more important point for our current debate is that Mills saw no apparent use for the scales and must have assumed they would not be missed in deciding to throw them away. After all, if the western Regulars had worn their scales in the field—that is, frequently—it seems doubtful Mills would ever have considered dumping the box in their first place. 2, 3

Similarly, the Harper’s Weekly print of the 18th US Regulars at the Battle of Pea Ridge clearly shows the men without scales. The copy below depicts this clearly, but I recommend looking at That Body of Brave Men, p. 146 for a clearer copy (and you might want to use a magnifying glass to see the detail). The most clear example is the rear rank man, third from the left—who is kneeling more or less upright—who has his shoulder outlined against the lighter field beyond, showing no scale there. Similarly, all the other men in the rear rank appear to not be wearing scales. Moreover, the men are wearing knapsacks and it seems impractical to wear both scales and a backpack at the same time. Adding to its authenticity, the artist of this drawing was almost certainly in the field during that period of the war and would have seen the Regulars moving into battle or at least marching in the field. Although the incident it depicts probably is fabricated—the 8th Missouri attacking over the 18th US—no where in the fierce efforts by the 18th US to clear its name and reputation (recounted in That Body of Brave Men) did anyone argue that the details of the drawing itself were inaccurate, a claim that might have gone a long way to bolstering the Regular’s claims that the incident could not have happened. That no such argument was made suggests the officers of the 18th US didn’t dispute the other details of the drawing.

3. As far as the eastern Regulars are concerned, the only drawing I have observed of the eastern Regulars in the field before 1862 depicts the men of the 3rd US without scales (see below). This drawing is from the August 1861 edition of Harper’s Weekly and depicts the 3rd US Regulars surrounding the mutinying 79th New York 2/19/2011 Highlanders and taking away the regiment’s colors. Given that the event occurred in the 79th’s camp in Kalorama—near Washington, D.C.—and immediately after First Bull Run, it is likely that the artist had seen the Regulars in the field when drawing the scene (whether he was actually there or not for the incident depicted is unclear). But clearly, the line of Regulars on the left is depicted without shoulder scales but still wearing the Old Army uniform of frock coat, dark blue pants, and Hardee hat. 4

4. Appearing without shoulder scales probably was common, enough so that some men posed for photos without them. The two examples below depict soldiers posing for a photograph without scales. Of course, we have many examples of Regulars posing for photos in their full dress uniform, complete with scales. Such poses are to be expected because shoulder scales were an important part of the full dress uniform (just ask Lieutenant Mills!). But at the same time, that these men—and perhaps others—had a photo taken without scales suggests that this look was acceptable, if not common. 5, 6 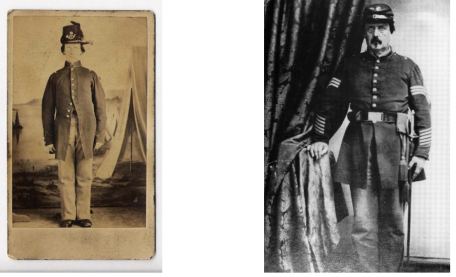 5. Lastly, I suggest that the very fact that we find little or no mention of the shoulder scales in soldier accounts and diaries—particularly from western Regulars—itself is more evidence that scales were not worn in the field. As Lieutenant Mills noted, the scales were widely viewed as useless, so if the men had been expected to wear such useless and cumbersome gear in the field, one would expect them to have complained long and loud about the wearing them at all. Moreover, the challenge of wearing shoulder scales, a backpack, and a cartridge box (remember, their boxes held 40 lead balls, unlike ours!) all at the same time almost certainly would have generated universal complaining. That there is no such recorded complaining probably is due to the scales not being worn in the field. I heartily encourage others to continue this research and add to it—or refute it as the data leads you—so that we can continue to give the most accurate impression of the Regular Army soldier during the Civil War. After all, our accuracy honors those who served! - David Welker, 3rd US Regulars