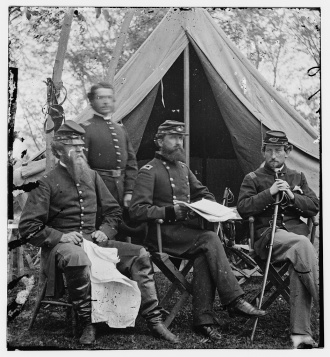 The Third U.S. Infantry Regiment, established in 1784 and still serving, is the oldest infantry regiment in the U.S. Army. Between 1784 and 1815 it was variously known as the First American Regiment, the First Regiment, the First Sub-Legion of the Legion of the United States, and the First Infantry. During its early years, the regiment garrisoned the posts of the Pennsylvania and Ohio frontier, fought the Indians at the Battle of Fallen Timbers in 1794, and participated in the Niagara-Canada Campaigns of the War of 1812. When the Army reorganized in 1815, the First Infantry was redesignated the Third Infantry, based on the seniority of its regimental commander.

From 1815 to 1840 the Third Infantry served at frontier posts in Louisiana, Arkansas, and Missouri, and in Florida for the last campaign against the Seminoles. In 1843, under the command of Lieutenant Colonel Ethan Allen Hitchcock, the Third Infantry moved to Jefferson Barracks, Missouri, as the instruction and demonstration troops for the School of Brigade Drill. Hitchcock was known for his strict -- some said outrageous and unreasonable -- uniform standards, which led the recruits and other troops to insultingly call members of the regiment "Buffsticks," after the strip of wood used when cleaning buttons and other uniform items. The soldiers of the regiment turned the insult into a motto, and proudly adopted "Buffsticks" as their nickname.

During the Mexican War the regiment participated in eight battles, including the final bayonet assault on the fortress of Chapultepec. The Third Infantry was the lead regiment on the Army's grand entrance into Mexico City on Sept. 14, 1847, and it was during this parade that the regiment reportedly earned its second and now more familiar nickname. As the troops passed in review, General Winfield Scott is said to have turned to his staff and said, "Gentlemen, take off your hats to the Old Guard of the Army." Whether Scott actually said this is open to some debate, and the regiment continued to use the nickname "Buffsticks" until well into the 20th Century.

Following the Mexican War, the Third Infantry garrisoned the territory of New Mexico until 1860, when the regiment was transferred to Texas. Company K was one of four companies posted to Fort Clark, Texas.

With the secession of Texas in February 1861, the regiment was to be peacefully withdrawn from the State, and six companies, including Company K, had departed by April 12 when war erupted with the attack on Fort Sumter.

Two companies - C and E - had been sent to Fort Pickens, Florida, in March, and the other five were sent to New York in early April. Company A, F and I were captured in Texas, and Company A did not rejoin the regiment until August 1862. Company F and I returned in March 1862.

At Bull Run on July 21, 1861, the five companies of the Third and three other companies of regular infantry fought as a battalion under the command of Major George Sykes, who had commanded Company K since 1855. The battalion went into action early in the morning, fought from the Union left flank to Henry Hill, then formed the rear guard and held the Union line near the Stone Bridge to keep the road open while the rest of the army retreated in disorder.

Other Regular regiments arrived in Washington in the fall and winter of 1861 and joined the Third as part of the city guard. Also, the two companies arrived from Florida during this time and the regiment was reorganized into a battalion of eight companies.

In March 1862, the Regular regiments were organized as the Reserve Infantry Brigade of the Army of the Potomac. Brigadier General George Sykes, who had commanded the Regular Battalion at Bull Run, was given command of the Brigade.

In May 1862, the Army was reorganized and the Third Infantry joined the 4th, 12th, and 14th Infantry to form the 1st Brigade, 2nd Division, 5th Army Corps. During the Seven Days Battles, the Third Infantry fought its finest battle in the front line in the Battle of Gaines' Mill. At the height of the action, four companies changed front under fire to blunt the attack of two Confederate brigades that threatened to overwhelm the 12th Infantry. At Second Bull Run, the Third Infantry fought as skirmishers at Groveton, then held Henry Hill and once again formed the rear guard as the Army withdrew. At Antietam the regiment remained in reserve all day, and at Fredericksburg the Third was among the last troops to recross the Rappahannock River to Falmouth when the attack on Marye's Heights failed.

The Third Infantry was part of the advance of the Union Army in the Battle of Chancellorsville in May 1863, then moved to secure the Rappahannock River crossings as the Army retreated yet again.

The Third Infantry's last major combat action came at the Wheatfield on July 2, 1863, during the Battle of Gettysburg. Fighting first in the advance and then in the withdrawal against overwhelming numbers, the Third Infantry in a little over an hour lost 73 men killed, wounded, and missing - including two commanding officers - out of 308 engaged.

Following Lee's retreat from Gettysburg, the Third Infantry was sent to New York City in mid-August to help restore order following the Draft Riots. By this time, the regiment, which had numbered 762 officers and men in January 1861, was down to fewer than 200 members under the command of a captain - Company D showed only two men on the rolls! The regimental commander ordered the depleted companies consolidated and reorganized and Company D ceased to exist for the remainder of the war.

The regiment returned to the Army of the Potomac in September 1863 and saw its final combat actions of the war in the Bristoe and Mine Run Campaigns. The Third Infantry returned to New York in early 1864, then moved back to Washington in October to serve on guard and patrol duty in the city. In February 1865, the Third Infantry was detailed to serve with the Headquarters Guard for the Army of the Potomac and it remained in that capacity until the end of the war.

After the surrender of the Confederate troops at Appomattox, the regiment marched to Washington, D.C. and participated in the grand review held in May 1865 to honor the victorious Union troops. The Third and 10th Infantry Regiments were the first infantry regiments in the parade and the only regular infantry units to appear in the two days of the grand review. By October 1865, the Third Infantry was en route to Kansas for a return to frontier service.

The Third Infantry remains on active duty today. Since 1948 it has been stationed at Fort Myer, Virginia, as the "Old Guard," the Army's official ceremonial unit and guardian of the Tomb of the Unknown Soldier.