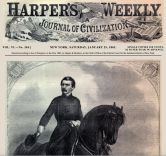 Harper's Weekly was a well known illustated newspaper that covered the entire duration of the Civil War.  It was very popular due to its drawings and stories that permitted subscribers to feel that they were emersed in the weekly events of the war.  Some of the famous artists that worked for Harper's included Thomas Nast and Winslow Hommer.  Other well known newspapers of the era include the New York Times, the New York Herald, and Frank Leslie's Illustrated.  Listed below are some websites that you can research these and other Civil War historical media resources.

To learm more about Harper's Weekly visit http://www.sonofthesouth.net/.  They have the entire collection online.

To learm more about Frank Leslie's Ilustrated  visit https://archive.org/details/soldierinourcivi01lesl/page/n11/mode/2up.  They provide access to his book "The Soldier in Our Civil War".