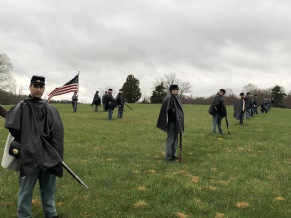 During the Civil War pickets and skirmishers had an important duty – to warn the army of the approach of an enemy and to keep them from observing and interfering with its operations at rest, on the march, or in a battle. This task, known as the petite guerre, or "small war" was very critical to the security of the regiment.

A skirmish line was composed of two companies in groups of four comrades in battle, five paces apart with the groups separated by no more than forty. A small body called a support (and in practice usually a company) was positioned about 150 yards behind “to fill vacant places, furnish the line with cartridges, relieve the fatigued, and serve as a rallying point.” All skirmishers were instructed to “carefully profit by any accidents of the ground to conceal themselves from the view of the enemy, and to shelter themselves from his fire.”

Four hundred yards behind the skirmish line was the reserve, usually formed in close order, upon which the skirmishers could fall back if pressed. This could be the main body of the regiment if close or another specifically formed for the purpose. The regulation stressed that strengths and distances could be adjusted as necessary. Rifles were in short supply early in the war, so these usually went to the flank companies, which, under the command of the two most experienced captains, were tasked with establishing the skirmish line.