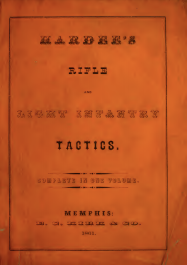 Soldiers spent a lot of time drilling, learning how to handle their weapons and maneuver on the battlefield.  The primary infantry drill manual used by the US Regulars throughout the war was Hardee's Rifle and Light Infantry Tactics. First adopted in 1855, it updated infantry drill to reflect the introduction of percussion rifled muskets.  When author Lieutenant Colonel William J. Hardee resigned to join the Confederacy, his volume was replaced by Major General Silas Casey's Infantry Tactics on August 11, 1862.  However, these two manuals are nearly identical; the only differences being that Casey rearranged paragraphs in one section and added a third volume, offering evolutions for larger organizations at the brigade and corps level.  All those interested in understanding and portraying the US Regular as he was during the Civil War should become familiar with Hardee's volume.