Virtually every woman wore a corset of some type under their clothing, from working class women to domestic servants to genteel ladies of society. The ideal was a waist of 15 inches, but corsets did come in different sizes so we know that not everyone squeezed themselves to match this standard. Corsets were stiffened with whalebone, steel, or even oak splits for women in the South during the war.

During the Victorian Age, including the Civil War, a tightly laced corset was widely associated with a woman’s virtue. In fact, many terms we use today to describe someone’s morality come from this association: “The allusion to loosening one’s stays [corsets] as a prelude to sexual activity permeated everyday life, so that women who were called “loose” were not being described physically so much as morally.

Here's where you can enter in text. Feel free to edit, move, delete or add a different page element. 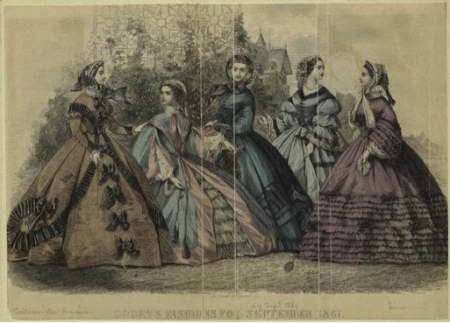 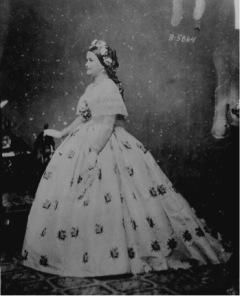 The women’s fashion feature most associated with the Civil War era is the hoop skirt, named for the structural support of wire hoops or whalebones called “crinolines,” worn under the skirt to hold its shape. In a typical dress, the width of the skirt at its widest point (which was close to the floor) was about 50 to 70 percent of the woman’s height.

Many women saw the crinoline as an improvement over the weight and cumbersomeness of wearing multiple petticoats—and there was less laundry, but hoop skirts posed other challenges. Sometimes the skirts tilted up on one side, exposing views of legs and undergarments, and they could catch on fire if women stood too close to fireplaces.

Death touched the hundreds of thousands of families during the Civil War, and the women put on mourning attire according to their stage of grief. 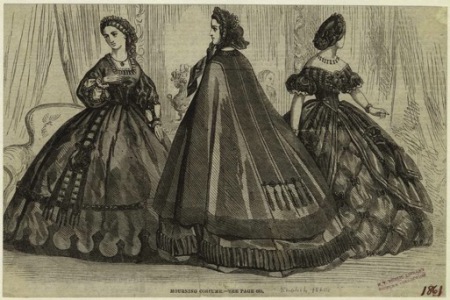 The period of mourning varied according to the relationship with the deceased. A widow was expected to wear deep mourning for at least one year. This included dull, lusterless black fabric, widow’s cap, black cuffs and collars.  Black petticoats, stockings and parasols were also required.

During the second stage of mourning (from twelve months to eighteen months after the death), the widow could trade off on fabric, such as silk or wool, and add jet black jewelry/ribbons to her attire.

The third stage of mourning commenced at eighteen months after the death, and allowed the half-mourning colors of grey, purple, mauve, lavender, or black and grey in her dress.

Layers of Women’s Clothing in the Civil War

Here's a list of the Civil War women’s clothing by layers:

Layer 2
* Corset or stays stiffened with whale bone
* Crinoline, hoop skirt, or 1 or 2 petticoats (dark color if traveling due to mud and dirt)

Gloves Victorian modesty dictated that ladies should wear gloves when going out to church or to a dance.  Gloves were not worn at all times and were removed when eating.

Nosegay Small bunch of aromatic flowers and herbs was a popular accessory in an era without deodorant.

Lace was not widely used, except for collars and cuffs

Parasol - a fabric umbrella carried on a sunny day to protect a woman's complexion from the sun, and offered a kind of portable shade