School of the Soldier

From the moment new recruits or "fresh fish" joined the ranks it was necessary to get them familiar with the basic drill commands, especially how to handle their muskets.  This drilling was usually conducted under the watchful eye of a corporal.  Taking a squad of four recruits, the corporal would spend hours drilling the new soldiers until they could teach the commands themselves. 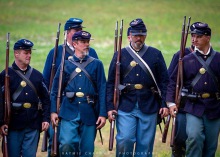 Drill was part of the daily routine for the Civil War soldier. Infantry soldiers drilled as squads and in company formations, each man getting accustomed to orders and formations such as marching in column and in a "company front", how to face properly, dress the line, and interact with his fellow soldiers. After an hour of drill on that level, the company moved onto regimental level drills and parades.

Get started by checking out this link:  http://www.drillnet.net/

The soldier practiced guard mount and other procedures such as the Manual of Arms, which infantrymen learned for the rifle-musket. Veterans of the war often remarked how they could recite the steps of loading in "nine" for many years after the war, thanks to the continual drill.

As "regulars" our unit takes great pride in drilling as authentically as possible.  In the early years of the war a primary difference between regular units and state units was the degree of professionalism and ability to execute complex manuevers on the battlefield. Drilling is also essential in maintaining safety.