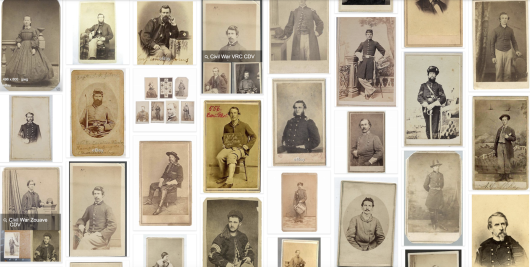 The carte de visite  or visiting card, abbreviated CdV, was a type of small photograph which was patented in Paris by photographer André Adolphe Eugène Disdéri in 1854, although first used by Louis Dodero.  Each photograph was the size of a visiting card, and such photograph cards were commonly traded among friends and visitors in the 1860s. Albums for the collection and display of cards became a common fixture in Victorian parlors. The immense popularity of these card photographs led to the publication and collection of photographs of prominent persons.

The Carte de Visite Project is to provide the opportunity for all unit members to have a CDV of their own.  The template below has a front and rear page guide.  Members can print and attach their images to appropriate card stock and have a way to promote the unit and provide a historic souvenir.

The carte de visite photograph proved to be a very popular item during the American Civil War. Soldiers, friends and family members would have a means of inexpensively obtaining photographs and sending them to loved ones in small envelopes. Photos of Abraham Lincoln, Ulysses S. Grant, and other celebrities of the era became instant hits in the North. People were not only buying photographs of themselves, but also collecting photographs of celebrities.