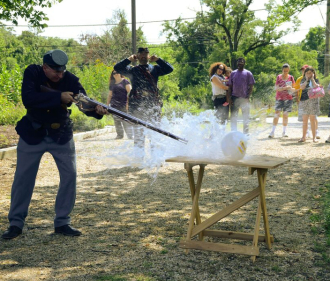 At living history events we often conduct a weapons safety demonstration.  That is where a soldier will shoot at a water-filled plastic gallon milk jug with a blank round at an extremely close distance. The end result is the Buffstick version of Sea World when the Orca explodes out of the water and then lands with a belly flop causing water to go everywhere.  The purpose of the demonstration is to remind spectators and reenactors alike that these reproduction weapons are still capable of inflicting injury.

Most often visitors are quite impressed with the demo and have a better appreciation for Civil War era weapons.  However, I have sometimes heard comments that this type of demo is not needed, that it’s cartoonish, or even childish.

To address the naysayers I will give three historical examples of what compressed air coming out of a rifled-musket can do.  The first comes from the National Park Service.  In 1863, before the start of that year’s campaign season a young eight year old lad from the Fredericksburg area was hired to clean a soldiers weapon.  At the very end of the cleaning process the lad pointed the rifled-musket at the ground and popped a cap to ensure the moisture had been expended.  Being a curious lad he acquired a second cap to see what caused the grass to jump after he popped the first cap.  With the butt of the rifled-musket resting on the ground and using a long stick he pressed down upon the trigger while looking intently down its muzzle.  The end result was that he spent the next Seventy years with only one working eye and a patch over the other; a heck of price to pay for being curious.

The second comes from the 125th of the Battle of Gettysburg in 1988 when a former member, Stan Sitzman, almost had something similar happen to him.  It was the Friday afternoon fight when the 11th Corps finally broke and ran.  In the ensuing chaos Stan ran in front of an individual reenactor who fired his weapon into the side of Stan’s head.  If Stan had not been wearing a bandana (imagine Audie Murphy from “Red Badge of Courage”) then the force of the blast would have shredded the skin on his head, making for a bloody and gruesome wound.  As it was, Stan ended up with a concussion and missing the entire remainder of that special event.

The third and last example took place six years later in 1994 at a battle reenactment where it happened to me.  I had been out of the hobby for a number of years but I thought that I still remembered all of the correct steps in the loading and firing of our rifled-muskets.  It was during an intense fight where we were firing as fast as possible.  I had wrongly assumed that if I removed the expended cap before loading the next round that it would somehow speed up my rate of fire.  With my right hand pouring the next round into the mouth of the muzzle the density of the black powder pushed the air down to the bottom of the barrel and then out the now capless cone.  This newly created flowing fresh breeze enabled a dormant ember at the bottom of my barrel to flare to life with the end result of the new black powder charge instantly exploding.

Afterwards I have tried numerous times to explain the pain as that force slammed into the upper palm of my right hand.  So far the best explanation that I can think of is if you laid your open hand facing up on a flat surface.  Then, use your other hand to slam a mallet, with countless metal burrs on its face, onto the palm as hard as you can.  Afterwards, spend the next 20 (+) years removing each flake out of the skin of your hand as they individually come to the surface.  Yes, this happened to me and I can still see the unexploded black powder flakes in my hand.

Going back to our demonstration, the basic physics is pretty simple to explain.  Compressed air, accompanied by a hot flame, is expended at a high rate of speed from a narrow opening before coming into contact with a solid object.  In this case the end result is a shattered plastic one gallon milk jug and water going everywhere.  With the remains of the milk jug in hand it is very easy to show the target audience, i.e. children, adults, potential recruits, fresh fish, etc. why you should never be in front of a firing weapon.  If we can prevent even one person from sneaking under the safety ropes at a battle reenactment to take that one perfect picture of a unit firing then this demonstration has accomplished its mission, the prevention of this type of injury.