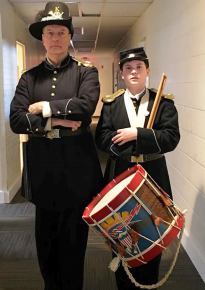 Thanks to Hollywood and TV, there’s a widespread misconception that Civil War soldiers spent most of their time fighting battles or sitting around the campfire whittling and singing songs. In reality, the vast majority of their time consisted of boring and mundane tasks such as drill, guard duty, and performing various chores around the camp. Their lives were highly regulated, from the moment they woke up to the minute they went to bed. Because there was no public address system or other form of mass communication, and very few soldiers had watches, the military used music—specifically Field Music--to regulate the life of the soldier.

Throughout the day, the Field Music, consisting primarily of the fife and drum but also the bugle, played a series of short tunes or “calls” known as “Camp Duty,” which signaled the times for various activities. The most recognizable to a modern audience is Reveille, played on the bugle. However, Civil War soldiers were more likely to hear the fife and drum Reveille, which was a series of short tunes played first thing in the morning after Drummer’s Call. There are numerous duty calls, and reenactors should learn to recognize them. During the war, soldiers would have heard these calls and tunes throughout the day--not as a form of entertainment, but as a timekeeping mechanism that enabled them to keep an army of thousands operating efficiently.

The main calls that will be used regularly are:

Here is a link to audio files for all of the calls in order:

As mentioned earlier, Drummer’s Call is the first thing played in the morning. Its main use is to gather the field music. The seconded use, of which pertains to all non-musicians, is to signal First Call.

Drill Call is used as a way to tell company commanders and their men to conduct drill at the company level.

For regimental formations Assembly will be played. This is typically played ten to fifteen minutes, or at the command of the regimental commander, after First Call. Companies are to form on their streets and march to their posts.