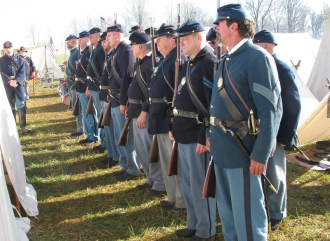 The Third U.S Regular Infantry is a Civil War living history group dedicated to educating the public on the life of the U.S. Regular infantry soldier.

Enlisted for five years at $13 a month (three years after January 1861), the Regulars were the professional backbone of the large volunteer armies so familiar in Civil War history.

The reenactors of the Third U.S. Regular Infantry portray the Regular soldier as he appeared in camp and in battle, in garrison and in ceremonial duties. Members wear both the familiar "fatigue" and the early-war "dress" uniform. All uniforms and equipment are reproductions carefully patterned after the originals. Authenticity is closely monitored and our impression is constantly evolving based on ongoing research and new information as it comes to light.

Company D formed in April 2000 at historic Fort Ward in Alexandria, Virginia, dedicated to portraying the Regular infantry soldier of the Civil War period as accurately and authentically as possible within a family atmosphere. In January 2004, Company K organized at Fort C.F. Smith in Arlington, VA, as a campaign-oriented company affiliated with Company D. In March 2007 the Medical Staff Regiment was organized as a Civil War medical impression affiliated with companies D and K for display at living histories. Company D and Company K were combined into a single unit, Company K, at Appomattox Court House, VA, in April 2010.

If you're interested in becoming a reenactor, or you're a detached reenactor looking for a new home, browse through our site and learn more about the forgotten soldiers of the Civil War that we portray: the Regular infantry and their families.