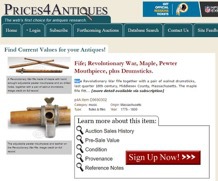 While not used extensively today, numerous musical instrument catalogs from the 19th and early 20th centuries advertised mouthpieces for the fife as a useful accessory, especially for beginners who wanted to learn the fingerings while developing an embouchure. (The now defunct Melody Flute Company of Laurel, MD used to sell small metal fifes with mouthpieces permanently attached to schools as beginner instruments well into the latter part of the 20th century, but they have been replaced completely by recorders, which do not require the player to form an embouchure.) 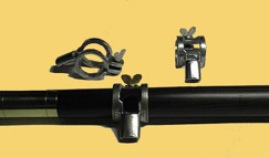 Most historic mouthpieces were made from pewter (as were the reproductions when they were available) and slid onto the instrument over the blow hole, and were secured with a butterfly head screw.

Mouthpieces were routinely advertised alongside ads for fifes in mail order catalogs.    Catalog ad for fife mouthpieces priced at $2.40 per dozen or .20 cents each! “Very useful for beginners” (Reproductions of these pewter mouthpieces sold for approximately $50.00 each in 2016.) 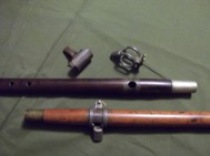 In addition to mouthpieces available through catalogs, local tinsmiths would make different types of snap on mouthpieces for the fife.

Snap-on mouthpieces were custom-made by local tinsmiths.  The Cloos “Full-Tone”  copied a late 19th c. manufactured standard but used no pewter in its construction. The rosewood fife shows wear from a long use of a round mouthpiece like the Full-Tone. The mouthpiece on the cherry fife is secured with linen string, the brass screw having been lost.  Author’s Collection (from Everybody Loves a Cloos Fife by AncientOne).

Fife Mouthpiece in the Civil War 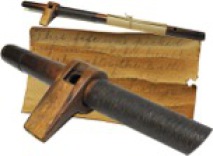 Fife mouthpieces are period correct for Civil War reenacting. A variety of pictures from that era offer examples of fifes with mouthpieces. As an example, the only wood fife on display at the Gettysburg National Military Park Visitor Center and Museum has a mouthpiece attached. 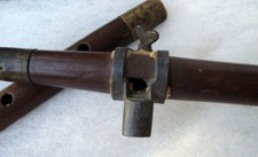 It’s said that this fife with a mouthpiece was used by a musician in the 1st Michigan Infantry on their departure to the war in 1861. 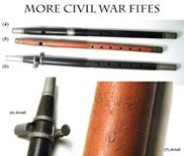 The Cloos model fife was a commonly used fife by Union field musicians during the war. The Gutta Percha (hard rubber) fife pictured to the left has a Cloos mouthpiece attached. 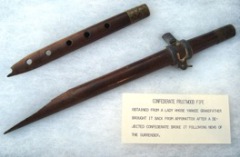 It appears that musicians on both sides of the Civil War used fifes with mouthpieces. The Rebel fife shown to the left, was used by a Confederate fifer who reportedly broke it in frustration upon the surrender of Confederate forces at Appomattox. 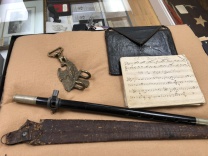 A display case of Civil War-era musician’s artifacts at the Little Drummer Boy antique shop in Gettysburg, PA includes a fife with a mouthpiece.

The pictures that follow of Civil War soldiers attest to the fact that fife mouthpieces were indeed used during the war by soldiers in the field and after the war by Civil War veterans.

Pvt. Toby Trout, 31st USCT--Union Civil War fifer with a mouthpiece on his instrument. Died from wounds suffered at Petersburg.

Unidentified Union Civil War fifer with mouthpiece on his instrument. 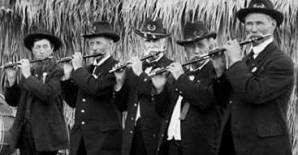 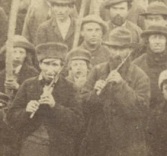 A postcard from 1910 shows an older man playing a fife with a mouthpiece—a Civil War veteran perhaps?

“Cheater” is not period correct

It’s difficult to tell exactly when the term “cheater” emerged to describe a mouthpiece for the fife. I cannot find any historical evidence that this term was actually used during the Civil War, but reenactors continue to repeat it, and what’s worse, offer unsubstantiated misinformation to the public about its origins. I’ve heard conflicting stories from reenactors regarding the mouthpiece for the fife such as:

“They were used in the military music schools during the war because they had thousands of new musicians they had to train up quickly, and they called them ‘cheaters’ because if you used one when learning, you were cheating at playing the instrument.”

“They were invented after the war so toothless old veterans could still play and needed a way to ‘cheat’ at playing the instrument.”

However, there are numerous ads for fife mouthpieces from the 19th and early 20th centuries and none of them use the word “cheater,” nor does a 1905 patent for a fife with a mouthpiece.

As best as I can determine, the term emerged in the mid-20th century, and I think it’s safe to say that “cheater” is not a period correct term. I have been unable to find the term in lists of Civil War slang or Civil War terminology or in a dictionary defined in this context, and have never seen it in decades of reading about the Civil War and ancient music. If the term “cheater” was around at the time of the Civil War and accepted as common usage in regard to the fife mouthpiece, someone surely would have recorded it somewhere.

Given the pictures of Civil War soldiers holding fifes with mouthpieces, I have difficulty believing they called them “cheaters,” which holds such a negative connotation, given their presence and apparent acceptance as an accessory for the instrument. It also appears that fifers at the time didn’t appear to be the least bit shy or embarrassed by the fact that they had mouthpieces on their instruments. If they had been, I guarantee you they would have removed them before having their pictures taken!

As a result, I don't think reenactors should be telling the public these mouthpieces were called “cheaters” during the Civil War unless some solid evidence surfaces to the contrary, nor should they call them that if musicians in their units use them today. We don't want to contribute to the pool of misinformation floating around out there, nor do we want to publicly embarrass or demean our musicians today who simply attach a mouthpiece to their instrument. Lots of instruments have mouthpieces--it’s not a sign of inexperience or ineptitude. I teach beginner fifers in a fife and drum corps and do not give them mouthpieces because if someone can form an embouchure, there’s no reason for them not to. But there are those who for a variety of reasons need a mouthpiece, and they are grateful to have an accessory that allows them to play this lively and enjoyable ancient instrument.

Besides, take a look at the Civil War-era fifers above who used mouthpieces on their instruments and imagine what they went through. Do we really want to associate them with a derogatory term like “cheater?”

--Claude J. Bauer is a fifer with the 3rd US Regular Infantry, Co. K Field Music. He also makes and sells fife mouthpieces, which can obtained through his online Etsy store:  https://www.etsy.com/shop/CyberFife?ref=pr_shop_more#items